Posted at 16:39h in Uncategorized, Weekly Readings by Aeolian Heart

“After one look at this planet any visitor from outer space would say ‘I want to see the manager.”

The week begins with Mercury turning direct in Capricorn, once again restoring confidence and decisiveness to all activities which require mental acuity and technical precision. However, Mercury is not done transiting Pluto in Capricorn and so the lessons of the retrograde have not yet reached their culmination. You will feel like you are traveling through an Interzone that ambles along the lines between many states of mind.

Over the weekend, as Pluto thrusts Mercury back into the depths of the subconscious, expect climbing thoughts and flowering words to burst forth with enough willpower to break through concrete. The power of prayer, mantra, spells, sigils, artwork, hypnosis etc…etc… will be greatly enhanced.

The weekend will also bring another square between Mercury and Uranus, so expect some sort of repetition regarding some conflicts or issues that arose around January 20th. Astrologers usually describe Uranus as the higher octave of Mercury, meaning that Uranus is the transpersonal intelligence that inspires Mercury’s personal intelligence.

One might also describe Uranus as the higher mind which perceives the macrocosm, and Mercury as the lower mind which perceives the microcosm. When these planets form a square, expect a paradoxical situation to occur. The universe offers riddles that may exasperate or excite you. Even if this energy seems to present something ideologically insoluble, bear in mind that it will work itself out in its own good time.

This week, the Uranian perspective will be of particular importance because the Sun is now in Aquarius, which is ruled by Uranus. Aquarius is an air sign, symbolized by the image of the water-bearer. Aquarian energy is that which sanctifies humanity with the holy water of the gods. When the Sun is in Aquarius, there is an opportunity to live on the edges or the fringes of your known world in order to gain a fresh perspective on the functionality of your life. Aquarian energy tends towards cold intellectualism, making this a perfect season in which to study your life from every angle with as much objectivity as possible.

The voice of Aquarius is dispassionate, but shockingly truthful. It is mystical, but often lacks the promise of bliss and redemption. It is a voice of genius, more often alienated by society than enchanted with it. Therefore, during this week, look for the Aquarian genius inside yourself. It will lead you to analyze your life from the perspective of an outsider looking in.

The Aquarian realm speaks through alien dream-time, where the waters of divine revelation flow effortlessly. Look for strange signs and symbols which speak only to you and to your calling in this life. Aquarius wants you to follow that calling, no matter how alone you may feel while doing so.

William S. Burroughs, an author famous for his highly controversial and provocative novels, was not an exemplary American. However, he was an exemplary Aquarian.

“I am not one of those weak-spirited, sappy Americans who want to be liked by all the people around them. I don’t care if people hate my guts; I assume most of them do.” 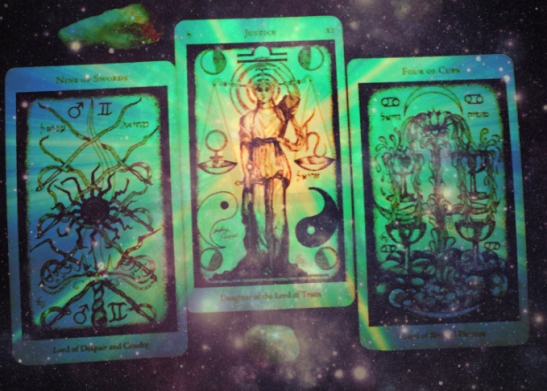 I. Nine of Swords II. Justice III. Four of Cups

Monday/Tuesday: The Nine of Swords

Unfortunately, the beginning of the week is marked by the Nine of Swords, which represents the shock that you must face when the Aquarian gaze begins to study your life objectively. You may feel suddenly so overwhelmed by the sorrows of the world that you go numb to other people’s pain. At first, this feels hollow and disquieting.

But remember, Aquarius lives in the realm of the shaman, where a certain distance must be maintained in order to handle the healing work that is necessary. If you are patient, you will watch your numbness transform into some kind of useful skill. Remember that the steadiness of a surgeon’s hand is something that grows from a certain numbness to other people’s pain.

“The first and most important thing an individual can do is to become an individual again, decontrol himself, train himself as to what is going on and win back as much independent ground for himself as possible”― William S. Burroughs

The middle of the week offers reprieve from any tension that you have been suffering. The Sun in Aquarius now offers its magical gift of independence of thought. Life seems very long when you’re lonely, but on Wednesday and Thursday, you will relish aloneness as it brings with it a sense of autonomy. This is a beautiful time to go out on a limb and believe whatever you want to believe, read whatever you want to read, and observe whatever stands out the most to you. This is your life to live and communion with your higher self may be far more interesting than your normal circle of friends. Enjoy the wisdom that purposeful solitude brings.

You may hear the voice of Aquarius say;

“Consider the impasse of a one-God universe. He is all-knowing and all-powerful. He can’t go anywhere, since He is already everywhere. He can’t do anything, since the act of doing presupposes opposition. His universe is irrevocably thermodynamic, having no friction by definition. So, He has to create friction: War, Fear, Sickness, Death, to keep his dying show on the road.

– William S. Burroughs “A One God Universe”(lyric from spoken-word recording)

Friday/Saturday/Sunday: The Four of Cups

“Your mind will answer most questions if you learn to relax and wait for the answer.”

Over the weekend, creativity gets a lovely boost from Venus in Capricorn sextiled Neptune in Pisces. However, the Four of Cups indicates that there will be a feeling of dissatisfaction with your work.

On Saturday, Mercury will conjunct Pluto for the third time in a month, an influence that offers special opportunities to cultivate the subtler powers of your mind. In order to fare well during this Mercury/Pluto transit, be sure to speak wisely and give your word of honor cautiously. In order to avoid unnecessary dissonance and consequences, be mindful to follow through on whatever you say you will do. These include promises made to yourself and others. Remember that any worthwhile magician always keeps their word.

On Sunday, January 31st, Mercury in Capricorn squares Uranus in Aries, creating a certain dissonance between your personal interests and the interests of the greater good. Expect sudden insights that cut to the core of the truth of your life. Expect to find out how little you truly know, which is a wiser place to be than to believe that you know it all.

“You were not there for the beginning. You will not be there for the end. Your knowledge of what is going on can only be superficial and relative”