Posted at 22:03h in Weekly Readings by aeolianheart@gmail.com

This week, the Moon is waning, the Saturn/Neptune square persists and Mars finally goes direct in Scorpio. A sense of limbo will remain until the New Moon next week. Expect to feel wearied by worn out places, worn out faces…

When Britain left the EU last Friday, a shock was felt around the world. Some are shouting for joy and some are screaming in anger. Personally, I feel this event has a deep resonance with the ideals of the Romantic era, a bittersweet time of revulsion and revolution. . .the declarations of independence that lead to a mountain of rotting skulls. In the mists of fermented memories, I could get really drunk on historical analogies, but it is not wise. This is a time to be here now.

Whatever side of this issue you find your sympathies on, the waves of devouring time carry the world upon a ruthless riptide of chaos. With or without reluctance, you must show acceptance for this fact. The need to find acceptance even in the most confusing times is the hunger from which philosophy is born. Without a philosophical foundation, during times like these you will drown in ecstasy or hysteria.

When seeking inspiration for living in integrity throughout life’s many surprises, there can be no finer text than Hagakure: The Secret Wisdom of the Samurai by Yamamoto Tsunetomo. It is true that in 2016 the Samurai warrior class of Japan has completely disappeared, but what is so beautiful about their philosophy was that they were always prepared to die. When you are prepared to die losing votes, losing money and losing games leads you towards great purpose rather than weakening your resolve.

On the first page, Tsunetomo says, “The Way of the Samurai is found in death.”

Historically speaking, Yamamoto Tsunetomo was a Samurai who lived the early 18th Century. His writings in Hagakure combine the teachings of Zen and Confucianism from the perspective of a warrior. Both philosophies are centered on loyalty, devotion, purity and selflessness, and thus Tsunetomo placed a strong emphasis on the notion of living in the present moment with a lucid mind.

He says, “We all want to live. And in large part we make our logic according to what we like. But not having attained our aim and continuing to live is cowardice.”

So now consider whatever troubles you are currently facing in your life, whether they be world events or personal challenges. Despite those challenges, are you living to attain an aim? Or are you living to attain just what you like? These two paths are not always mutually exclusive. However, under great duress we discover what we are willing to make great sacrifices for, lest we live a life of mere pleasure seeking and cowardice.

The word Hagakure translates to hidden beneath the leaves, which is ecologically evocative as well as a masterful pun in terms of book publishing. By the turn of the 20th Century, when Hagakure was rewritten for modern readers by famous author Yukio Mishima, the way of the Samurai was already dying. In 1906, their season had reached the end of autumn.

Despite the huge cultural changes in Japan that made the way of the Samurai totally obsolete, because of the Hagakure, the world is still blessed to be able to share in some of their memory. Consider the wisdom in this statement. It is just the right medicine for the degeneracy of our times.

“Current trends cannot be stopped in the flow of time.  The world continues to degenerate because we are nearing the end of times. The year is not comprised only of the two pleasant seasons of spring and summer.  The same can be said of each day.  Thus, any longing for the ‘good old days’ of a hundred years ago is futile.  It is more judicious to adapt and improve the ways of the present.  Men who hold a nostalgic view of the past are misguided in their outlook because they are blind to the reality of the present.  Conversely, those who revel in the present, but loathe the customs and traditions of yesteryear, can’t differentiate between core principles and insignificant details.”

So this week, no matter what is striking hard upon the limits of your acceptable reality, do not yearn to live as a ghost from a bygone era. Nor should you live in the present as an amnesiac. The Spirit of this Age must be embraced with open eyes and full awareness. Escaping into ideals will never allow you to achieve any aims in this life.

On Monday, the Last Quarter Moon in Aries will square the Sun in Cancer. There will arise a momentary conflict between the urge to express outrage against oppositional forces and the urge to remain safe and comfortable in the rhetoric of like-minded individuals. Considering that the Moon is waning and Mars is still in retrograde, it is best to let things go rather than trying to stir things up.

Saying less is more at the beginning of the week. With Mercury in Gemini squared to Chiron in Pisces, it may be be more difficult to communicate since many painful internal wounds will suddenly feel vulnerable to inspection.

The best news for the beginning of the week is Venus in Cancer’s trine with Neptune in Pisces. This is an aspect that lends itself well to laying back and being carried away by music. If the world is getting you down, let yourself be carried away on the wings of a transcendent song.

These are days filled to the brim with the base notes of pathos. Steeped in languid thoughts and memories, the beginning of this week is a bittersweet treasure for an artist and a rancid waste for a bureaucrat.

Pyramid of Skulls by Paul Cezanne (1901)

On Wednesday, Mars finally goes direct in Scorpio after having been in retrograde since April 17th. Feelings of restraint and frustration may slowly begin to dissipate, but in the middle of the week you may feel more like standing still, gazing upon your current situation with an unblinking thousand yard stare.

After the 12th of July, your lost energy and vitality will be noticeably restored. But until then, it is not yet time to attack, celebrate or run around in circles. Enjoy the silence.

On Thursday, Mercury moves into Cancer, bringing intellectual processes into instinctual and deeply impressionable territories. The great halls of memory are at your disposal and consciousness becomes more like malleable clay, shaped and sculpted by the tides of time.

Also on this day, Venus in Cancer opposes Pluto in Capricorn. An abrupt confrontation with manipulative forces is likely to emerge. With lovers there is an especial amount of potential for suspicion, paranoia, and jealousy. 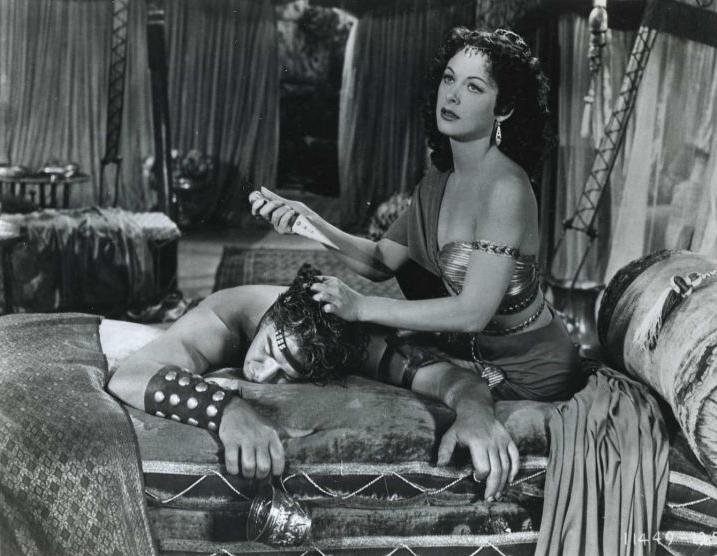 still from Samson and Delilah

But power struggles that utilize coercive tactics of control can arise through innumerable scenarios and relationships. Move carefully and take heed that you are neither the victim nor the perpetrator of these dalliances.

In the face of manipulation and power struggles,

“It will not do to make rash judgments concerning good and evil. However, one should not be sluggish. It is said that one is not truly a Samurai if he does not make his decisions quickly and break right through to completion.”

On Friday and Saturday, the waning Moon will traverse the sign of Gemini allowing you to integrate any loose ends from the the last solar season. Sit and listen before you speak.

“When someone is giving you his opinion, you should receive it with deep gratitude even though it is worthless.”

On Sunday, the Sun in Cancer will trine Neptune in Pisces. As Venus’ trine to Neptune at the beginning of the week heightened your sensitivity to beauty, so too will this solar dialogue with Neptune increase your sense of transcendent purpose in this life.

On Sunday you will have access to a limitless sense of self which you can use to widen your vision of what life is really all about.

“No matter what it is, there is nothing that cannot be done. If one manifests the determination, he can move heaven and earth as he pleases.”

What would inspire you to move heaven and earth?

During this Sun/Neptune aspect you may discover that there is a quest, a mystery or a redeeming love worth devoting your life’s work to. The hidden wisdom of your world will emerge from underneath the fallen leaves.

Speak memory about the way of the Samurai!

“What is called generosity is really compassion. In the Shin’ei it is written, “Seen from the eye of compassion, there is no one to be disliked. One who has sinned is to be pitied all the more.” There is no limit to the breadth and depth of one’s heart. There is room enough for all. . . The wisdom and courage that come from compassion are real wisdom and courage.”