Posted at 14:11h in Astrology by aeolianheart@gmail.com

On Friday, May 6th there will be a New Moon at 16 degrees Taurus. The Moon is exalted in the sign of Taurus and therefore this will be a time to connect with a particularly powerful moment of regeneration.

For as much as the Moon has an affinity with shape-shifting water, (its natural element) it is within solid earth and definite form (Taurus) that the Moon finds her most ecstatic pleasures. In Taurus, the wavering light calms, the shifting sand solidifies, and the Moon receives the vision of form within dimension, eternally flooded by sensate intelligence. This New Moon in Taurus will breathe new life into the Earth, relishing the touch, taste and feeling of everything.

The Shrine, detail by J.W. Waterhouse

Since Mercury Retrograde and Venus are also currently in the sign of Taurus, the emphasis on pleasure seeking will be undeniable. Your imagination will crave stimulation through the engagement of the senses. The New Moon in Taurus will be in a Grand Earth Trine between Jupiter in Virgo and Pluto in Capricorn, which is a harmonious aspect that supports your efforts to bring dreams into reality.  Envision a garden of earthly delights and use this vision to summon the essence of joy and fertility into your physical experience.

Pomps and Vanities by John Collier

In addition to the highly productive and supportive energy of the Grand Earth Trine, the New Moon in Taurus and Venus in Taurus will be sextiling Neptune in Pisces, opening you up to mystical experience and communion with the Muse. This sextile with Neptune summons the power of imagination to vivify and beautify the external world. On a New Moon such as this, you might find that long dormant aspects of the psyche suddenly come to life, giving you visions of possibility, paradox, and Paradise. This might be your night to meet Kubla Khan.

Samuel Taylor Coleridge is one the greatest poets who ever wrote in the English language. Thus, his life and works are honored and remembered through a mixture of historical facts and mystifying legend. Coleridge’s most legendary moment is without a doubt the story that describes the genesis of his unfinished poem, (his fragment of a vision) Kubla Khan, which begins:

In Xanadu did Kubla Khan

Where Alph, the sacred river, ran

Through caverns measureless to man

Down to a sunless sea.

Legend has it, one night, after finding tranquility in a sumptuous dose of laudanum, he fell into a charmed sleep, in which an epic poem (many hundreds of lines long) constructed itself in his mind. He described that in this sleep, “the images rose up before him as things, with a parallel production of the correspondent expressions, without any sensation or consciousness of effort.

Upon waking from this state, Coleridge was only able to recall a mere fragment of the sweeping epic that he had experienced in his dreamworld and that fragment is what readers know now as Kubla Khan. The world he is able to illuminate for us, even in this fragment, is so rich and fragrant that it remains one of the most magical poems ever written in its ability to transport your senses into a realm that exists between waking and dreams.

With walls and towers were girdled round;

And there were gardens bright with sinuous rills,

Where blossomed many an incense-bearing tree;

And here were forests ancient as the hills,

Reading Kubla Khan is like getting dosed with genius. To modern readers, this description of Coleridge’s drug-induced cinematic vision is still haunting and provocative, since it implies that the dreamer explores a world as vivid and real as any waking one.

As a philosopher of the imagination, Coleridge left this fragment of a vision to induce questions about where consciousness goes when the body sleeps. (caverns measureless to man)

Kubla Khan represents Coleridge’s scientific commentary on the experience of imagination, where a poet receives communion with a genius/ muse/ angel and willingly receives their messages.

In modern parlance, these experiences are often referred to as tuning into “a stream of consciousness” or dipping into the collective unconscious. (Where Alph, the sacred river, ran ) The reason why Kubla Khan is still so provocative is because it describes raw mystical experience, which no science or religion has any satisfying answers to simply explain away. Coupled with the poet’s skill in crafting verse, visions such as these still haunt with mystery.

A savage place! as holy and enchanted

As e’er beneath a waning moon was haunted

By woman wailing for her demon-lover! 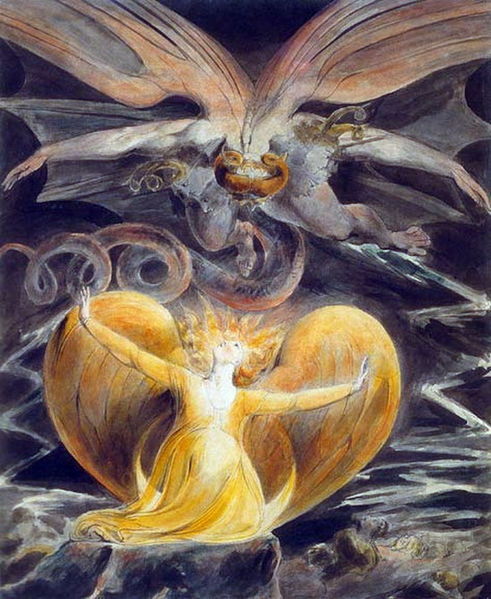 The Great Red Dragon and the Woman Clothed with the Sun, by William Blake

Coleridge claims that he published the story and fragment “rather as a psychological curiosity, rather than on the ground of any supposed poetic merits.”

Meaning that, (according to this coy version of the story) he was offering Kubla Khan, not for consideration as a great poem, but as proof that he had really gone somewhere else in that visionary state. This fragmentary memory was offered as proof of his spiritual travels.

A damsel with a dulcimer

In a vision once I saw:

It was an Abyssinian maid

And on her dulcimer she played,

Damsel with a Dulcimer by William Clarke Wontner

To be able to bring dreams into reality is a fundamental human desire. Just as Coleridge plucked the lines of Kubla Khan from the dreamworld, on this New Moon in Taurus, you may be imbued with the steady focus to make the unconscious become conscious.

Could I revive within me

Her symphony and song,

To such a deep delight ’twould win me,

That with music loud and long

The Charmer by John William Waterhouse

Kubla Khan, or a vision in a dream is a fragment of divine revelation wrenched from mysterious caverns, where Paradise is lost and found.

And all who heard should see them there,

And all should cry, Beware! Beware!

His flashing eyes, his floating hair!

Weave a circle round him thrice,

And close your eyes with holy dread

With consideration to this New Moon’s exaltation in Taurus, the imagination will be most nourished by experiencing the body as an emanation of consciousness, discovering infinite revelations within sensation

Just as Coleridge once did, revere your imagination as being your window to the infinite. For this New Moon in Taurus, set an intention to cultivate your enjoyment of the senses and increase the value that you place upon your creative work. If you choose to do so, many pleasures and joys will be sure to follow!

For he on honey-dew hath fed,

And drunk the milk of Paradise.